This week’s Friday Funny comes to us from my fine stash of old e-mails. People send me the darnedest things. Strangely,  as I type this, I have the urge to warn all who read… “Don’t Try this at home!!”

And, with that, I give you: 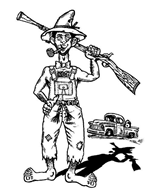 After their 11th child, an Alabama couple decided that was enough, as they could not afford a larger bed.   So the husband went to his veterinarian and told him that  he and his cousin didn’t want to have any more children.

The doctor told him that there was a procedure called a  vasectomy that could fix the problem but that it was expensive. ‘A less costly alternative,’ said the doctor, ‘is to go home, get a cherry bomb, (fireworks  are legal in Alabama) light it, put it in a beer can  (COORS), then hold the can up to your ear and count to  10.’

The Alabamian said to the doctor, ‘I may not be the  smartest tool in the shed, bu t I don’t see how putting a cherry bomb in a beer can next to my ear is going to help  me.’

‘Trust me,’ said the doctor.

So the man went home, lit a cherry bomb and put it in a  beer can. He held the can up to his ear and began to count!

At which point he paused, placed the beer can between his legs and continued counting on his other hand.