No new funnies in my e-mail this week.  🙁  I guess my normal spammers, er um I mean friends, were actually busy doing work or pursuing other meaningful activities this week. So, I’m pulling this week’s Friday Funny from the e-mail Archive again. I’ve got quite a store of goodies there!

Hope you have a great Weekend!

The teacher gave her fifth grade class an assignment: get their parents to tell them a story with a moral at the end of it. The next day the kids came back and one by one began to tell their stories.

Kathy said, “My father’s a farmer and we have a lot of egg-laying hens. One time we were taking our eggs to market in a basket on the front seat Of the pickup when we hit a bump in the  road and all the eggs went flying and broke and made a mess”

“And what’s the moral of the story?” asked the teacher.

“Don’t put all your eggs in one basket!”

“Our family are farmers too. But we raise chickens for the  meat market. We had a dozen eggs one time, but when they  hatched we only got ten live chicks. And the moral to this story is, don’t count your chickens until they’re hatched.”

“That was a fine story Lucy. Johnny do you have a story to share?”

“Yes, ma’am, my daddy told me this story about my uncle Bob. 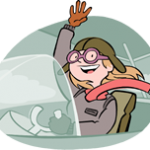 Uncle Bob was a pilot in Vietnam and his plane got hit. He had  to bail out over enemy territory and all he had was a bottle of whiskey, a machine gun and a machete.

“Good heavens,” said the horrified teacher, ” What kind of moral did your daddy tell you from that horrible story?”

“Don’t f*ck with Uncle Bob when he’s been drinking.”

This site uses Akismet to reduce spam. Learn how your comment data is processed.