You are here: Home / Support / Apple / Got an iPhone? Better turn it off! 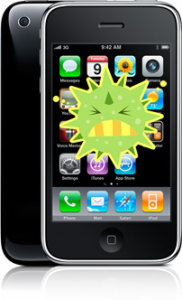 I just followed a tweet over to Mashable and read another article about the latest Apple security flaw. This time affecting the iPhone.

Cybersecurity researchers, Charlie Miller and Collin Mulliner, have identified a vulnerability in the iPhone OS that will allow an attacker to take control of the Phone via a SMS message.  They have, supposedly, notified Apple more than a month ago about this vulnerability, but  the company still hasn’t released a patch.

The two plan to publicize the security flaw today at the Black Hat cybersecurity conference in Las Vegas.  If you are a victim of this attack, currently the only fix is to turn off your phone.

Hopefully Apple will get a move on and update the OS before this become a wide spread problem. Can’t blame this one on AT&T, that’s for sure. If you are an iPhone user, you might consider pulling out that Blackberry again!

You can read more about this security flaw from these websites: